Mitchell Peterson is a recurring anti-hero in the series, Ready Jet Go!.

Mitchell is an aspiring detective. Most episodes he is in feature him trying to solve some kind of case, with most of them being related to Jet and/or his family and friends. Mitchell even wears his own detective badge, made from tinfoil, at times, and is revealed to idolize Sherlock Holmes in Jet's First Halloween, calling him "the greatest detective of all". Mitchell is often seen sitting at his little table in front of his house. He has an assistant in the form of his pet dog, Cody, and Mindy even became his detective partner in Detective Mindy.

Mitchell's personality often changes throughout the episodes. In some episodes, he is harsh, cruel, snobbish, and condescending towards others around him, specifically Jet Propulsion and his friends. The most notable example is in Mindy's Mystery, where he acts stuck-up towards the other kids as they try to solve their mystery, and he claims that they aren't real detectives, and that their mystery is a pretend mystery. Mitchell often spies on Jet and his friends. Mitchell has also tried to expose Jet a few times throughout the series. In Kid-Kart Derby, he tells everyone that Jet is using alien technology to power his kid kart, but Jet gets off the hook because Mr. Peterson claims that what he did was recycling. In Back to Bortron 7, he notices that the hologram of the Propulsion house is glitching. When it disappears altogether, he gathers the entire population of Boxwood Terrace to prove that the Propulsions are aliens who have a "magical house". However, Jet 2 causes an eclipse which distracts the townspeople from seeing the Propulsion house land back on Earth. Mitchell is also not above cheating to get his way. In Solar System Bake-Off!, he spies on Mindy's baking contest entry and tried to take notes about it. In the aforementioned Kid-Kart Derby, he installed an ion drive into his kid kart, but it backfired on him since ion drives only work in the vacuum of space.

However, other episodes of the show reveal that Mitchell is actually not that bad of a person. In Detective Mindy, he gradually warms up to Mindy and lets her solve his case with him, despite showing animosity towards her in previous episodes. At the end of the episode, he even gets down on one knee and told Mindy that he thinks that this was the beginning of a beautiful friendship. Mitchell even shyly told her that he liked her Saturn cake in Solar System Bake-Off!. Mitchell even went to Mindy's flugelhorn concert at the end of Mindy's Mystery. Mitchell can also at the very least tolerate Jet, Sean, and Sydney at times, specifically in the earlier episodes of the show. Mitchell is also a bit shy and socially awkward, especially in Solar System Bake-Off!. Mitchell wants to win the baking contest, so he sneaks into Jet's house and tries to get information about the gang's recipe. When Mitchell enters the house, he acts very socially awkward, speaking almost robot-like. When Sydney asks him what he is writing in his notebook, Mitchell gets nervous and runs away. In Holidays in Boxwood Terrace, it is revealed that Mitchell isn't really a mean person, he just acts like it because of how shy he is. However, he eventually gets the courage to join Jet's group at the end. Mitchell gets his heroic moment in One Small Step, where he sees the kids in Little Dipper Lake, and rescues them with his rowboat. Out of gratitude, they invite him to their sleepover, much to his delight.

Mitchell is quite intelligent. He has keen observation skills, knows a lot of big words, and happens to be a weather expert. Mitchell used to be quite naive, but by season 2 he had become more doubtful that certain things are real. In That's One Gigantic Pumpkin, Jet Propulsion!, he constantly rebuffs Mindy and Lillian's claims that Halloween is magical, only to be proven wrong when he sees Jet's enormous pumpkin flying in the air.

According to Satellite Selfie, Mitchell has been living in Boxwood Terrace for at least over a year. Mitchell has also won the annual kid-kart derby three years in a row, but lost the fourth year thanks to not installing a battery in his kid-kart. The Grandest Canyon reveals that he took a vacation in Arizona with his family for a few days.

Mitchell is a young boy with fair-skin. Mitchell has freckles, but they are often hard to see. He is noticeably shorter than Jet, Sydney, and Sean, but is taller than Mindy and Lillian. He has green eyes, and wears brown square "nerd" glasses. He has a prominent round nose. He always wears a plaid red detective's hat, covering his brunet, slicked-back hair. He has a white shirt under his red jacket, which has yellow cuffs. He has tan khakis and black sneakers.

Mitchell without his hat or glasses on, in One Small Step 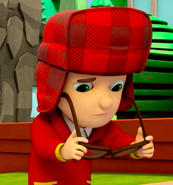 Mitchell without glasses, as seen in Jet Shrinks the Kids

Retrieved from "https://readyjetgo.fandom.com/wiki/Mitchell_Peterson?oldid=6189"
Community content is available under CC-BY-SA unless otherwise noted.