One Small Step is a Ready Jet Go! one-hour special. It premiered in June of 2019 as part of PBS' Summer of Space lineup. [1]

Jet and the gang have a fun night planned with a sleepover in Jet's backyard, mini-golf, and star-gazing-after all, it's the 50th anniversary of the Apollo 11 moon landing! When Jet reveals that he's built a brand new super saucer that can take all the kids (and Sunspot) to the Moon, they HAVE to test it out. After a rough landing, the kids realize that a part of the saucer is broken. With Celery and Carrot's permission, they decide to have their sleepover on the Moon, but after falling asleep they notice Jet and Sunspot have disappeared! Sydney stays behind to work on the saucer while Sean and Mindy venture out to find their friends.[2]

The movie starts out in Boxwood Terrace, where a bird is flying. Mitchell is spying on Jet once again, claiming himself to be the world's greatest detective. He sees Mindy playing golf, and Jet rolling a sleeping bag. Sydney comes by with her backpack and her Commander Cressida figure. She is singing the Commander Cressida theme song. Jet is very excited for the "oversleep". Mindy is also very excited, because this will be her very first sleepover at someone else's house. Jet asks where Sean is. Sean arrives with his Neil Armstrong figure, and everyone greets him. Jet greets Sean's Neil Armstrong figure.

Sean says that this weekend is the anniversary of the first time that humans landed on the moon. Sean explains that it was 50 years ago, and it was called the Apollo mission. Neil Armstrong was the first one to walk on the moon. Mindy compares the astronauts staying in a little pod overnight to a sleepover. Sean then explains how the astronauts got home, and gushes about what an achievement it was.

Mindy is confused, because she thinks that space travel is super easy. Sean says that for the kids and the Propulsions, it is easy to go to space because the saucer has Interstellar Overdrive, but it wasn't easy for the Apollo astronauts, as they had good old fashioned rockets. Sydney refers to the team's brainpower and teamwork as "the right stuff". Sean asks Jet if the sleepover can be about celebrating the first Apollo 11 moon landing. Mindy also wants it to be about celebrating mini-golf. Jet is more excited about the mini-golf, until Sean reminds him of the moon landing. Jet then remembers about something that he wants to show the others.

Jet takes the other kids into the garage, where he unveils his latest invention, a newer, bigger super-saucer. Sean, Sydney, and Mindy are amazed at the saucer. It can hold all of the kids and Sunspot. Jet wants to test it out by flying it to the moon, landing it, and flying it back to Earth. Mindy is very excited to fly to the moon and back.  Sean is surprisingly excited for once, and compares it to the Apollo mission. Sydney, on the other hand, is very unsure of the idea. Celery and Carrot then show up. Jet asks them if he can take the kids to the moon in the super saucer. Carrot allows them to go, as long as they come back for dinner.

Jet then lists off items on a checklist. Sydney is still hesitant about the idea. Jet decides to make up a funny song about it, "Super Saucer", in order to convince Sydney to tag along. Sydney is successfully persuaded into going. All of a sudden, the kids are in their space suits and are in a space suit. Sean remarks that they were charmed into it by the power of song. Jet then sings the take-off song, blasting the kids off.

Jet makes a lot of turns and twists with the saucer as the kids fly. Sean feels sick to his stomach, while Mindy has lots of fun. Jet shoots the saucer up into space. The kids approach the moon. Sydney asks Jet if he has a plan for how he's going to land the saucer. Jet says that he's got help. Jet 2 then rises from a hatch. Mindy observes how tiny the Earth looks from the moon. Jet then realizes that he forgot to program a landing, and he programmed doughnuts instead. Sydney decides to get the saucer to back off on its descent, as it is a little steep. Jet tries to deploy the landing gear, but then pulls it off by accident. Jet commands Jet 2 to fire the retro thrusters.

Jet 2 only starts one of the thrusters, causing the saucer to spin around. TBC 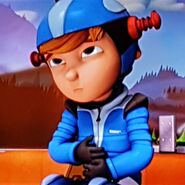 Retrieved from "https://readyjetgo.fandom.com/wiki/One_Small_Step?oldid=5797"
Community content is available under CC-BY-SA unless otherwise noted.