Zerk  is Jet's cousin. He is an alien from Bortron 7.

In Whole Lotta Shakin', unlike other Bortronians, Zerk is competitive and a braggart, wanting to make his moon structures bigger and higher than everyone else's and boasting about them. He claims Earthies are not good at building. In Back to Bortron 7, Zerk is nicer to Sean and Sydney, but says that Bortron 7 is better than Earth and that the Earth only having one moon must be weird. But he also calls Earthies 'adorable' and says he wants to learn all about 'Earth ways' until he knows everything. In Zerk Visits Earth, he doesn't say anything bad about Earth or Earthies, and apparently likes Earth. At the end, he even calls Sean, Sydney, and Mindy the 'greatest Earthies ever'.

In Earth Mission to Moon, he calls his cousin Jet for help on a class assignment. He asks when the first Earthie visited Bortron. Mindy says that humans have never been to Bortron. Zerk thanks her.

In Whole Lotta Shakin', it is revealed that he held the record for building the tallest tower on the moon. Throughout the episode, he calls Jet on his smartwatch and teases him. He also says that Earthies aren't good builders. He is proven wrong when Jet, Sean, and Sydney build a strong tower on the moon. At the end of the episode, he gets his karma when Jet throws his smartwatch out of the saucer so Zerk can no longer bother him.

In Back to Bortron 7, he makes his first physical appearance. He is excited to see the Earthies for the first time, and even calls them adorable. He also eats lunch with them. However, he is very hyperactive, which sets off Sean and Sydney a bit. He also says insulting things like that Bortron 7 is better than Earth and having 1 moon must be weird, and Jet is quick to defend Earth. Zerk informs Jet that he is due to leave Earth after Carrot and Celery's presentation, to which Jet is shocked.

Zerk, Back to Bortron 7 onwards. 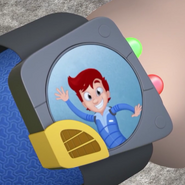 Retrieved from "https://readyjetgo.fandom.com/wiki/Zerk?oldid=6125"
Community content is available under CC-BY-SA unless otherwise noted.